These past few months have been a struggle for everyone. And yet for some, it has been more difficult than others.  This reminds me of the first sentence of Anna Karenina which now rings more true than ever.

All happy families are like one another; each unhappy family is unhappy in its own way. Leo Tolstoy

Interpreted this can mean that each unhappy family brings different baggage from their own families of origin. Two households merged into one from four parents and siblings. The unhealthy dynamics that played out, inside this home [of origin], were interpreted individually. When a crisis hits a family, each member deals with it in their own separate ways. Thus, bringing all of these family parts, of each couple, into their own domain and without therapy to support these persons, you will have nothing but chaos during this virus (though the relationship started out this way, the virus is just adding to the mess). You are stuck with each other 24/7 and you aren’t retired. One or both of you may be without a job. You may or may not have children, either way being in an uncomfortable situation with someone you are not happy with; it can’t be easy. If you were happy with your partner pre-virus, you are probably doing fine now. If there were lingering problems or elephants in the room; it is much worse by now.

China’s Divorce Spike Is a Warning to Rest of Locked-Down World.

Don’t hesitate to reach out and contact a local therapist. Working on your relationship is important to the commitment that you began on your wedding day. It is why you chose to say the vows and stand before your friends and family. In regard to your budget, it is a less expensive option than considering divorce and in regard to your values wouldn’t you rather work things out with the one you love than just give up? Because deep down inside, you do love this person and you have been through many things together. Challenges make a relationship stronger as long as both are willing to do what it takes to turn things around.

I have been trained by the Gottman Institute and use these techniques when I work with couples. We start by learning the “Seven Principles to Making a Marriage (or Relationship) Work” (This is also the name of Dr. Gottman’s bestselling book). These seven principles are:

Self-soothing – taking deep breaths when you are feeling emotionally overwhelmed. Taking a walk to get away from                the conflict or just going to your room to get some space.

And, according to Dr. Gottman, what gets in the way of all of the above is the “4 Horseman of the Apocalypse of the Relationship.” These four horseman are: Criticism, Contempt, Defensiveness and Stonewalling.

You can do one of three things when you are dealing with relationship angst. One, continue to do the same thing over and over again; hoping to get a different result. Two, see a couples counselor and work on the marriage. Three, get a divorce. We live in a society where everyone seems to choose the third option because it seems easier to start over again rather than working with what you have. However, if you have built a foundation of trust and commitment than you have invested in an amazing relationship and don’t the two of you deserve to at least work through this obstacle? Marriages aren’t meant to be easy and perfect; you have to work at this. Relationships are no different, except you don’t have an official or legally binding contract. Even if, in the end you choose to walk away, therapy is the answer to learning from that relationship so that you can have healthy closure between the two of you. If there are kids involved this will be a good thing overall so that you can parent them like a team once you dissolve the marriage.

There are two resources that I love to share with people who are coming to see me for couples counseling. I have already mentioned the Gottman Institute and so you can learn more by going to their website and taking a look at all that they have to offer in their estore. I also use Dr. Gary Chapman’s work: The 5 Love Languages, as an adjunct to the work I was trained in from the Gottman Institute. Both are amazing resources during these difficult times.

Don’t give up, toughen up and get support for your relationship. You will be glad you did! 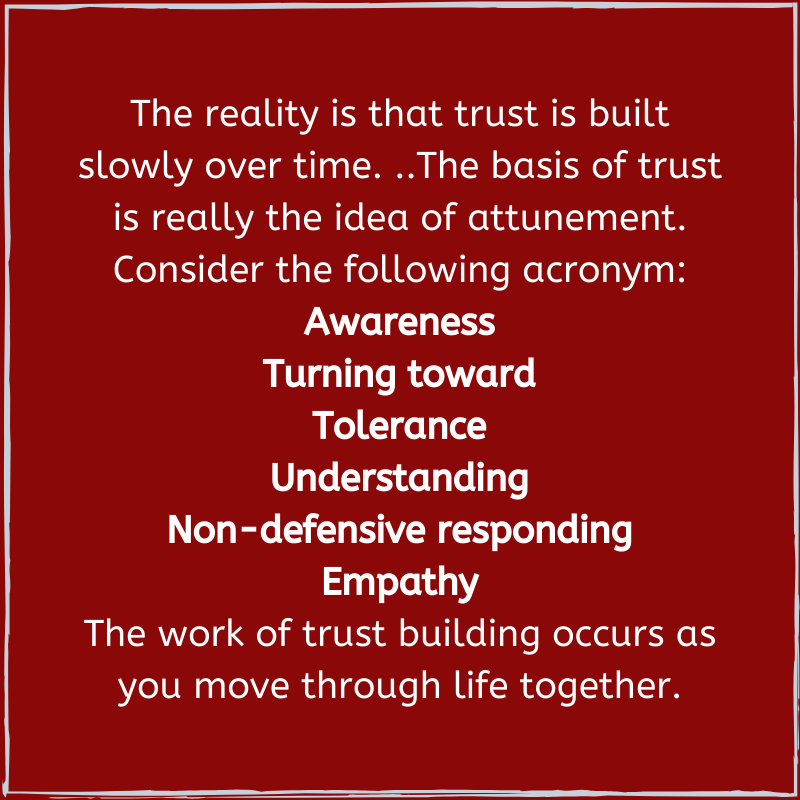