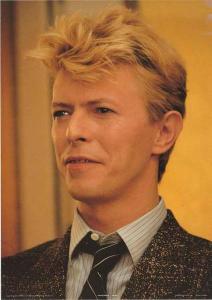 1983 poster that once hung in my living room

It was shocking to hear that he passed a month ago, as most of his fans had no idea he was dying. As I began to read the obituary in “The Guardian,” mid-way there was a YouTube link for Lazarus which I clicked on to watch.  Listening to the first sentence “Look up here, I’m in heaven,” and the chills began to creep up. What an amazing way to say goodbye at the end of your life. At the same time, I began looking at other articles related to his passing and kept hearing Christopher Sandford’s name as the author of what appears to be Bowie’s only biography, entitled “Loving the Alien.” I put myself in queue through Amazon, for this book which was immediately on backorder after his death.

I am in the German years now and I have to say this is not an enjoyable book to read. Firstly, it is not written like a story but a bunch of bits and pieces. Sometimes the author repeats himself and other times he does not, which makes it difficult because I still have no clue who “The Gillman’s” are who have been referenced several times in the book. Why do I care about them and why does he keep adding input about hearsay that they had learned of?  The whole book is hearsay, as this was not an authorized book. It is a compilation of interviews, ex-band members, ex-lovers, one-night stands, passersby who happened upon him, etc… I kept thinking to myself, “What would I say if I was talking about a one-night stand?” The few that I have had in my 20’s, I can barely recall, let alone remember their name. If they have become famous, I still wouldn’t remember them and not because I was on drugs, which all of these people were.

Of course I have never read a rock and roll book before and never intend to again (Actually, I did read Sting’s memoir, Broken Music, prior to this and it was quite good). I was more than curious about David Bowie and now I have learned more than I wanted to know. If I had read this in my 20’s, I still would have been shocked, though I would say I would have been in denial too. This is how I have always liked to imagine him, in denial. Rumors about him meeting his wife in bed with another man, for example, I always assumed was just that. It turns out; he himself said this in some interview in the 70’s. The version of the rumor I heard, had the addition of Mick Jagger in place of “another man,” which was not what he said, though according to this book he had dalliances with him and his wife, Bianca, as well. Yet, another part of my denial, that he was bi-sexual. Not only this, he also slept with transsexual people. It seems in fact that he slept with anyone and everyone, no matter what their race, religion, age, or sex. I keep trying to say to myself that he was an artist and an eccentric one at that. In fact he doesn’t seem to be that much different from Howard Hughes and apparently he might have also been schizophrenic as well.

The reason I cannot be in denial is due to an old friend I knew in the 1980’s, whose girlfriend was my roommate in California. This guy was head of lighting for Van Halen and told me about helping out with a short part of a tour he did with Bowie for extra money. He shared differences between working with the two greats and told me that I should be glad I will never meet Bowie as I wouldn’t appreciate his music anymore. At the time, it just seemed like something abstract, one man’s point of view. I knew he wasn’t lying but I did put it out of my head until now. After all, he did sign an autograph for me a few years later when an ex-boyfriend had the privilege of hanging out at some swank club in LA. It was on a napkin but I can’t recall what I did with it. My beau was actually an ex at the time he got it but he knew I loved his music so much, that not only did he do this but he proceeded to call me at 1 or 2am just to tell me.

The book will end with his current widow Iman. I imagine it will say a lot more positive by then, at least I hope so. I still want to think of him as a person who reconciled with his past in the end and became a better person.

All in all, it is how they say now “TMI.”  I can’t fathom a person having done all of these things but he did. I do feel better though about my own younger days which really weren’t so bad comparatively speaking.

No matter what his lifestyle, he was David Bowie. As I read, I continue to think of the stories my friend shared about Van Halen on tour, remembering rumors about Ozzy Osborne and other big rock bands of the time. Ego and power gives way to eccentric behaviors because we want it and we allow it. I sometimes wonder why more isn’t done to help groom these people from the get go, rather than allowing them to get away with things. It is painful to watch and read; to see someone humiliate themselves is not something I admire as a character trait. Then of course it is a double edged sword. The promoters want them to act like fools because the audience loves the press but at the same time, it takes away from the budget as well. It sounds like most of Bowie’s finances, in the 70’s and early 80’s were simply borrowed based on hopes for future royalties. His $200/day cocaine habit was just one of the many varied expenses he had at that time. Edna St. Vincent Millay lived the end of her years like this, according to her biography, because she and her husband were prescription pill addicts by this time.

Now though, when I look at his work, I will be unable to forget that he cried a lot and drank his urine at one time. It is hard being the type of person, I am, who can’t stop putting visual images in my head to replace the writing or what I hear and then can’t get them out of my mind. It is no different than learning about sex, as a teen and then every time I saw my parents or their friends, it was all I could think about was to imagine this person and their husband or wife in bed. Creepy.

In the end he was a master artist. A masterpiece. An actor, painter, writer, singer, chameleon, mime, performer, and probably many other things I am sure I am not aware of. From the 80’s on, he was quite a handsome chap. I didn’t like the 70’s and I really wish he hadn’t fixed his teeth. He is one of those people that no one will ever be able to recreate. Many people have tried to be like him but an enigma is irreplaceable. Think on this as a caveat when you watch the film that will undoubtedly be made about his life.