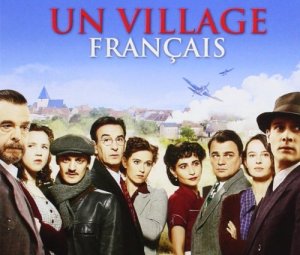 A French Village is set in German occupied France, World War II. We are being shown local townspeople being forced to make choices to survive. It is romantic, because there is always love when you are in a traumatic situation. It is not biased and so you see bad Germans and bad French. What is amazing is that the most important thing that you see is people at war. As you watch it, you have to try not to view this from the lens of an educated person who obviously knows what happened during WWII. You must try to behave as ignorantly as the characters are to have an ability to appreciate their choices and empathize with them. Some people you don’t empathize with such as the character Heinrich Müller, who enjoys putting cigarettes out on people. Including the one he loved.

Today, I watched the first episode of the third season and was struck by the fact that I felt as I did when I worked in the county government for eight years. In this episode the head of the local government, the prefect (I believe he is called or deputy prefect) is handed a list of Jewish names to round up in the neighborhood. Up until this time, the city of Villenueve was protected and the Jewish people could more or less feel their lives were somewhat safe, although they were unable to run their businesses. In this tiny town, they assumed that the Prime Minister Phillipe Pétain, had the power to protect French Jews from being deported. In this episode we learn that this has now changed. When I worked for the county government our mindset was “What was in the best interests of the children,” until the recession hit. Then it was all about saving money and putting them in the cheapest places. I fought this and all the other changes that were going on until I was put on Administrative Leave for a year and then I finally quit. I quit because their evidence was lies or fabricated stories and I knew I would be fired if I stuck around.  I couldn’t believe that a huge agency like that would be so concerned about me (there were lots of people involved). So while, my personal situation with the government is a far cry from making decisions during World War II, I like putting things into perspective with the here and now.

When you think of a soldier at war, doing what he or she is told to do, they really don’t have any choices of whether or not they like it. When the “team” loses, suddenly we turn on them, and everyone is punished; whether they really had a choice or not. This is something I keep thinking about as I watch this show. While the character may seem bad, you can recognize a corporate boss; eager to get a promotion. You can see a “company man” who does what he is told. When you are working for corporate America or government, this is how most people behave. Most employees don’t sit down and weigh the consequences of what their boss tells them or how it is going to affect people, business, employees, or the community at large. You just do it because that is what you are told. At the end of the day, you go home to your families and try to forget about what you heard.  I didn’t have a family to go home to, so I went home and thought about my day a little more. That was my problem, I thought too much!

As I have seen a trailer for the seventh and last season, I am aware of the fact that many of these people will be blamed for the choices that they made. Every episode has been and is going to be sad and tragic but that one will be the hardest to endure. The reason is that these characters who have lasted till the seventh season, their lives will have been disrupted to the point of forgetting who they are. Already we are seeing choices that are being made to help a Jewish maid, or a lover, or a business associate who is collaborating to stay alive. They aren’t trying to help a vast number of people though at times they try to get the list, for example, from 20 down to 10.

It is really too bad that most Americans, especially liberals won’t see this TV show. As far as I am aware, the only way you can see it now is if you have MHz Choice which is an international channel you have to pay for and have to know it even exists. I was aware of MHz from PBS when they pretended to collect International Mysteries from around the world. After doing some digging I realized the guy on PBS was lying; all they did was purchase a channel. They had me going though for a while there. American liberals love to blame people and do it so loud that you feel nauseous having to listen to it day after day after day. I feel that most of the time it is very hypocritical and seems to lack in values. I am on the border of the left and right and can never seem to sit on one side.

We are in an era now where people are being blamed who had ancestors in the Civil War. They want to take down a statue of a soldier in the South, General Robert E. Lee. He was a man who did his job and because he came from the south, chose this side so he wouldn’t be killing his own family. He was a soldier being asked to lead a team, a side of government. If the south had won, we would want to tear down a statue of General Ulysses S. Grant. I don’t see a need to tear down any statue because I am fond of history. General Lee wasn’t responsible for slavery as Adolph Hitler was responsible for the holocaust. It is apples and oranges; but here in America we are not reasonable people. We allow ignorance to prevail because we feel sorry for them (those in this mindset).

A French Village could teach Americans quite a great deal about having to make choices in a time of war.

Whether or not they would be able to focus on such a great historical show without finding it racist, I could not say.  The show even shows a shady Jewish character, could Americans handle this? This seems to be the new wave of lying to our children. We educate them with period pieces that have politically correct storylines rather than literal or factual storylines. If North and South, probably one of the last great American TV historical fictions made, were filmed today; it would be such a joke. No doubt they would not be able to create an honest re-make. The actors would complain that they could not do the show because they could not speak the historically accurate lines (which would mean they are terrible actors).

I cannot imagine how tense it must have been to be on the set of A French Village. These actors do not ever come out of character, so that we are able to feel as if we are there; with them. I feel transported into another time and place. I feel tense every moment, wondering what will happen to this person or that. So tense that I had to look it all up online to see who will live and who will die. I just couldn’t keep watching without this sense of relief because it is traumatizing to watch this TV show. I do know what happened and while I try to think like the character, I am not perfect. When you feel like these characters are real people and they actually existed, you know you are hooked and drawn in.

If you have read “The Nightingale,” by Kristin Hannah, published in 2015, you will no doubt appreciate A French Village. I had read it last summer and so it was fresh in my mind. Two completely different stories as Ms. Hannah’s book was a little more biased. I feel it is important that A French Village created a lack of bias so that you can wonder. So that you could have a discussion after watching the show and think a little more deeply about those times.

I grew up with a step-father who took political asylum in the United States in 1956. When I wrote a historical fiction about that time period, it was while I was on leave from the government. It was actually perfect timing to have a sense of communist Hungary. I remember a family member telling me that I was actually on house arrest from my job. At the time, I had no idea why I was being paid to stay at home and do nothing. My father raised me to fear Russians and communists. He told us all kinds of horrible stories. I tried not to be completely biased while writing because I knew some of that was his hatred of people who ruined his life and his family’s lives. As I did research, as most historians due, you read the facts and put together your own interpretation of what you see. This is blended together with the biased interpretations of the people who witnessed. I don’t say biased in a bad way either. No one can ever really know the whole story. A French Village seems to be saying this. They are showing you a broader perspective, 75 years later.