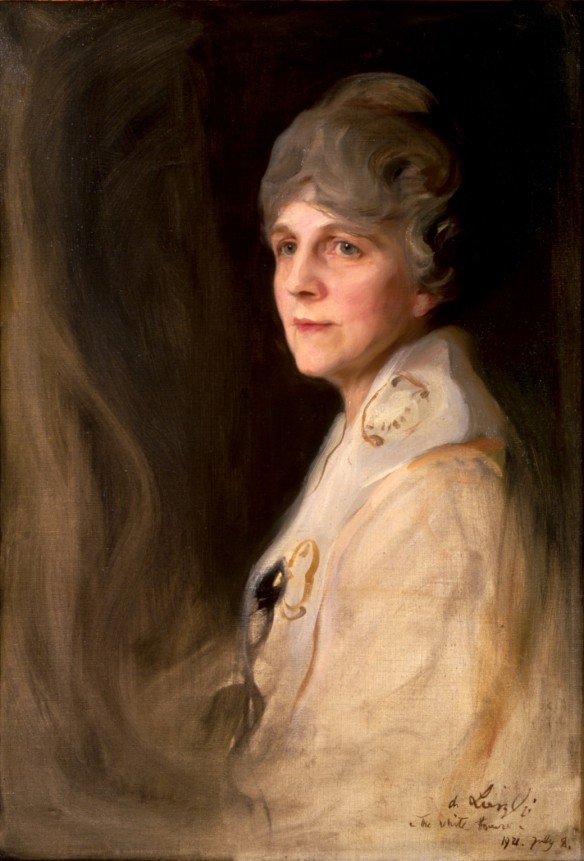 Her favorite painting of herself

Florence Mabel Kling – Harding (August 15, 1860 – November 21, 1924 Leo/Hera) was the 29th First Lady of the United States. When searching for a book to read about her, my first First Lady to do an article on, I chose the book by Katherine A.S. Sibley. The reason being that there was a lot of controversy associated with the Warren Harding presidency (posthumously) and this book came from a more positive angle. I wanted to find out more about Mrs. Harding as a woman. As I began to read her story, I realized I had so many things in common with her. I was able to identify with her life (pre-White House years) and could empathize with some of the ways in which she behaved as a mother and grandmother; in her time period.

Florence was not a stranger to controversy, it met her every step of the way from the moment she was a frisky young adult of 19 and married the wrong guy. She was meant to become a concert pianist and study at the Cincinnati Conservatory of Music. Instead, she eloped (they could never find records of a marriage certificate) to Henry Atherton De Wolfe. He was a drunk and this lasted six years. In the meantime, however, she gave birth to her only child Marshall Eugene. Being a divorced woman in 1886 and a single mother at that, her father decided that it was in her best interests to let he and her mother raise the child. They took over and allowed her to spend time with her son but he made the decisions as to how the child would be raised. Florence lived alone and made a living off of giving piano lessons.

She met Warren G. Harding four years later and he was five years younger than she. He owned the “Marion Star,” when they met. They married a year later and Florence immediately went to task in becoming, not just his wife, but his business partner as well. This would continue throughout their marriage. Mr. Harding tried to take an interest in her son, who continued to be raised by her father and it made somewhat of an impression on Marshall.

Marshall would go on to Michigan State to study journalism and played football there as well. He made some attempts at going into business but eventually became like his own father instead. At 34 years old, he died of alcoholism an tuberculosis. His own father had died by this point as well. At his death he left a widow (Esther Naomi Neely) with a young boy, (George) and girl, (Eugenie) to raise. Mrs. Harding would keep in touch with this family (Esther eventually re-married) and she gave monthly checks to Esther for child support.

In this time period, people did not divorce and the gossip columns and social media outlets of today were, thankfully, unavailable at that time. When Warren G. Harding became the 29th president in 1921, Mrs. Harding circumvented any knowledge of her previous family from getting into the press. As she was a newspaper woman herself, she played to the journalists by becoming their friends and gave them information but refused to do interviews. In return, they respected her anonymity. Mrs. Hardings grandchildren were never at the White House. She did not visit them, during the time they were in office but she did maintain correspondence with their mother.

This is an interesting point about Mrs. Harding. A lot can be said about her pushiness toward her daughter-in-law; giving advice on how to raise the children. She was frugal with her child support (it was a lot in those days but she could have afforded more than she did). Florence would also send hand-me-down dresses (of her own) to be used as fabric to make Eugenie’s clothes. I am sure Esther did not appreciate all the meddling but we don’t really know because only Mrs. Harding’s letters were preserved. We do know though that Mrs. Harding began to regard Esther in more of a confidante type of way, telling her more intimate details about her life. I see this as a bit narcissistic though, and while I am empathic toward Mrs. Harding, I can still imagine this might be the case. She had no real relationship with Esther, other than her letters and money. They rarely saw each other from what I can detect in this book. So, for her to be so forward, appears a bit narcissistic or entitled to do so. In the end however, Mrs. Harding left a great fortune to her grandchildren and they were only in their mid-20’s at this time.

With regard to her marriage to Mr. Harding, Florence faced many struggles. He was a philanderer, like many presidents before and after him. Still, she remained strong and stalwart and it appears he did appreciate this. While he was not faithful, it does seem that he respected his wife very much and took her opinions. He nicknamed her “The Ducchess,” which she evidently enjoyed hearing. While Mrs. Harding is not given the credit that Eleanor Roosevelt would receive (she was only in office for two and a half years); she was just as involved in politics and in advising her husband. Meanwhile, Mr. Harding, had two major affairs – one to a woman who was married herself and best friends with the Hardings. The other woman was more clandestine and produced a child. However, the only child of Warren G. Harding, (Elizabeth Britton) was not proven with DNA results, and published in the New York Times, until 2015 (using Ancestry.com). So in the book I read, written by Ms. Sibley and published in 2009, she continues to state that it was highly unlikely (since the Hardings were married for 32 years and never had a child). This was an affirmed belief by all of the doctors involved with the Hardings at that time as well. Nonetheless it was true but the DNA was done posthumously as Ms. Britton did not wish to clear it up for herself. Ah, secrets and lies!!

The Daily Star’s thoughts on the First Lady:

Mrs. Harding is far better looking than her pictures…her smile is the essence of sweetness and graciousness, while her photographs often give her the appearance of sternness

It appears that President Hardings time in office was somewhat similar to that of President Trump now. He brought a lot of friends with him to the White House who assumed a great many roles. Some of them did take advantage of their positions but it seems as if they kept the President in the clear. How this would be handled now, since President Harding was a Republican, I would assume he would get the same treatment as President Trump. President Harding differed though because he was well-liked by the public at that time and this was in great part to his wife’s role in orchestrating public events. Mrs. Harding, began inviting the public to the White House and in fact this became the precedent that has continued to this day. Of course at that time, the fear of terrorists was unheard of. The Hardings actually went out and met with the public – and shook all of their hands – when they were present for these occasions. The public were also offered food and drink. Large soiree’s occurred during the Hardings time in office as well. People who throw good parties, have great numbers of friends. Especially when you are making them feel welcome in the highest office of this country. 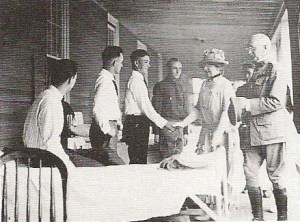 Florence took her role to heart and was not just involved in planning parties and decorating the house. Suffrage was ratified right before they went into office and so Mrs. Harding was the very first wife to vote for her own husband. She was very involved in helping Warren choose cabinet members (some of their friends) and writing the speeches he would present. She was involved with women’s concerns and took part in the conditions faced by female criminals and creating a Women’s Prison. She had gatherings with women journalists at the White House. She invited notable women to the White House such as Madam Curie. Not only was she involved with raising awareness toward women and their issues, she was also passionate about war veterans. She toured many hospitals and gave public functions for soldiers and their families. Florence and Warren Harding had a great love for animals. While their family did not include children of their own, they did have several dogs and a horse. As a result, philanthropy toward animal rights was another great cause they both shared. Ms. Sibley took offense to this though, in writing that Florence had no problems with wearing a fur coat. In that time period, it was normal to wear furs and being “Politically Correct” was unheard of. While people enjoyed pets and wanted to protect them, the issue of non-pet animals was really not a concept at that time. I don’t feel confused by this at all.

A journalist asked First Lady Mrs. Harding about women in politics and this is her short but typical response to the press:

What do you think of women in politics?” “I believe it is a good thing under certain circumstances

Unfortunately, another struggle with the Hardings marriage was the health and wellness of both of them. Florence almost died in office and Warren did die. Mrs. Hardings health was an issue throughout their entire marriage but came to an almost fatal blow within the first year of the presidency. The top doctors were called in and lived there for many months. One of them was Dr. Boone (an ancestor of Daniel). She was a great fan of a French motivational health speaker at that time, Émile Coué and would use his mantra: Every day, in every way I am getting better and better. This worked and she would eventually heal, though the sickness would continue to come and go. By the time her husband died, she began to lose interest in remaining and she followed him a year and three months later.

Warren’s death would even become a controversy as well, much later. It was surmised that she orchestrated this by poisoning him. The theory is based on the fact that she did not want an autopsy. Many family members do not do this when they are assured by their doctors as to the cause.  I find this reasoning hard to believe as there were nurses in the room when he died and a doctor was by his side up until the last half hour. I also find this hard to believe when you look at the emotional toll it took on Florence and how quickly she would follow him. Doctor’s today, attribute his death to being a mistake of his doctor’s who assumed it was one thing and ignored other signs (but also as they were not as knowledgeable at that time). My feeling is that Florence died of a broken heart, loneliness, and giving up her will to live.

We often want to search for posthumous theories, to try and understand or to make history fit with our own concerns in modern day times. Sometimes this makes good sense but many more times, it is best to let a “cigar just be a cigar,” to rephrase a Freudian quote.

What I also enjoyed, in reading about Florence K. Harding, is that she was a follower of the occult and enjoyed talking to psychics and astrologers. She was very well aware that Warren would win the presidency but also that he would die in office. Yet, even though people do believe in metaphysics and the supernatural, it doesn’t take away the excitement when it is proven and he is announced as the next President. Nor, does it eliminate the pain when the person does die as predicted. 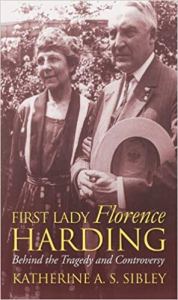