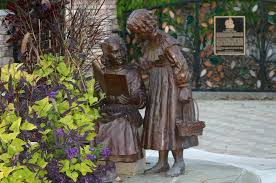 Grace and Mary Innis as Teens

Thanks to Mary and Grace Innis, two sisters who purchased this property and built a home toward the end of their days, this beautiful landscape exists for our benefit. This property is now know as Inniswoods Metro Gardens. The home where they live, which is now offices and a place to rent for meetings, was first occupied by the two ladies in August of 1961. Mary died five years later and Grace continued to stay there and keep up the property until her death in 1982. The 37 acre property was donated to the city about ten years before she died though (but she remained). I heard that she did this to keep from having property developers move in and rip it up but I don’t know if this is a fact or she just wanted to preserve all the work she had accomplished. Maybe it was both. 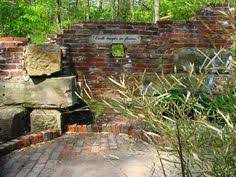 Part of the Secret Garden

The park has a secret garden near a children’s play area. It has an area for concerts to be held with a huge lawn surrounding this for about a few hundred people. There is a creek running through the property with what appears to be an original bridge and a modern bridge. It is hard to know what was planted by Grace and what was planted by the city. I had assumed she did all the landscaping but after reading notes in the office library, I saw that this was not the case. As I walked around afterward, I started to look for signs of what might have originally been there vs. volunteer landscapers. It really doesn’t matter, it is just that when I tour a historic area I like to imagine the inhabitants living there and what they might have been looking at.

Lovely sculptures inhabit the property, none of which were probably there when the sisters lived there. One is a sculpture of the two of them as teens in the “Sisters Garden” which is meant to look like a miniature farm. The art piece which struck me the oddest was Sky Woman on a turtle. I believe there is a Native American story behind this as the woman appears to be of this background. There is an Iroquois story book you can get online called “Sky Woman and the Big Turtle.” The tribe was once found along the St. Lawrence River in New York. Perhaps the sculpture was based on this story (I didn’t find a reference to it at the park). I would love to get a smaller version of it though as it is very beautiful and unique. I am sure my friends in the Sand Play Therapists world could have a day discussing this. 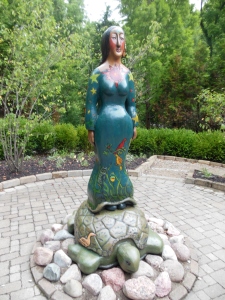 A couple of weddings were going on while I was there today and I saw quite a few places that were obviously created just for that purpose. When Grace was alive, she was a part of many horticultural societies and would open her grounds to the public on occasion as well as hosting events here. I recall going to the Park of Roses in Clintonville with my grandmother but I don’t believe she knew about Inniswoods as it was never mentioned.

Unfortunately, they do not allow food there so you can’t consider taking a picnic, nor can you take your animals. However, considering they way people behave in our society today, it makes a lot of sense. This area is a paradise of sorts and a wonderful place to go on a date or just take your kids out for a stroll. If you ever happen to be visiting Northeastern Columbus make sure to plan a day at this park. You won’t be disappointed.

(Note: All photos here grabbed from the Internet)