This is an amazing documentary of women who are called “Appalachian.” While these ladies are not from Ohio, their kinfolk migrated here over the years and settled around our fine state. You can still hear the dialect amongst certain elder women, here in Ohio and a hint of this talk from others. A wonderful lady I grew up with, used these words:

Perhaps you can recall some words that gave you a smile as well. I once worked with a client down in the Wilmington area that had such a thick dialect I often had to ask what he was saying because I had never heard his way of speaking before.

What I find superior amongst these women is their ability to be a survivor. These are ladies who would never ask for a handout from the government because they already know how to make do with what they have. If they don’t have it, they can grow it, bake it, sew it, or fix it. This is a skill that most women do not know today and could not do if their lives depended on it. I believe there will come a time when this will be necessary.

Cherish your elders while you have them. They may seem old fashioned and strange now but I guarantee you that as you age, they will make more and more sense.

This old house was where Della and her kin lived in KY, estimated time would be 1930’s-40’s and back. This home was a three room place for a sharecropper and his family. It had a big living room, a fireplace, a big bed in the living room, the bedroom had 3 beds, there was a big kitchen and a long table with chairs made by Della’s father. Three kids slept in each bed and parents were in the living room. In order to find this home, Della and her husband had to work hard traipsing through weeds and looking out for snakes before they were able to find this and take a photo. 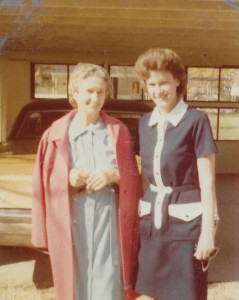 Mom and Norma Jean are standing in front of the garage for their home and Della and Don’s home. Behind the windows is Della and Don’s home and in front of them (which you can’t see of course) is their home. It was a two car garage and attached to it is the original home that Don and Della lived in before they built the home behind the window. The original home was a one bedroom house that I vaguely remember from peering through the window from time to time. It had no bathroom and so Della, Don and the two girls had to go to Mom and Norma’s for hygiene.